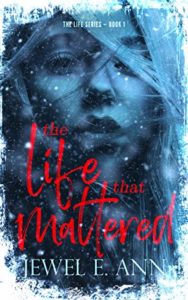 Sex isn’t love.
Love isn’t sex.
And friendship is neither.The son of a French Olympic skier and a Malaysian fashion designer, Ronin Alexander has lived the life of a nomad, traveling the world to find his next adventure.Life takes a dramatic turn when he meets Evelyn, a beautiful scientist who owns a bath shop in Aspen, Colorado. They defy all the rules of relationships, falling hard and quickly in love.Their world intertwines with Evelyn’s two best friends, the Governor and his soon-to-be wife. The four become close—very close.

When tragedy strikes, things from their pasts are unveiled—unimaginable truths and the grim realization that life will never be the same.

Jewel E. Ann steps into another dimension with this mind-bending thriller, a provocative story that pushes boundaries and tests the true meaning of love.

“For me, I felt like we were a fact—the sky was blue, water was wet, the wind blew. Ronin and Evelyn just were.”

This story opens up on a dramatic prologue and ends on an evil cliffhanger! So that’s no wonder that I wrote “Jewel is evil”.

I can hear her sadistic laugh all the way from Colorado to Belgium!

Just say it Jewel: you love torturing your readers!

Because when WE are all left wondering what happens to them, how she will survive AND reconcile this with the prologue (I still have no clue) YOU are comfortable doing some video where you express your (false) concern about our state of mind while YOU already know how it ends!!! So unfair! I WANT MY MONEY BACK!

Kidding, kidding! You can take all my money if you promise to send me the sequel the second you get paid.

Sorry guys, I just had to vent and let some steam lose before writing a seemingly intelligent review.

Now let’s get back to business!

The Life that Mattered is as you’ve guessed book one in a duology. So expect a cliffy.

It’s about love, life and friendship.

Evie is best friend forever with Lila and Graham, who tagged along later in their life.

As Evie said about Lila and her:

“We dragged each other through the trenches, held each other up. That was my relationship with Lila. Had been. Was then. Always would be.”

Graham joined their duo in college, befriending Evie first and falling in love with Lila.

Their relationship is …unique. I feared for one moment that Jewel would take me to a dreaded path but at the last minute, we veered off course.

Yet I feel that this chapter is not closed forever and already am apprehensive for what’s to come in book two!

When on a trip with their friends to Vancouver, Evie will meet handsome and charming Ronin.

Right from the start, there is something special.

And it was a damn gorgeous love story!

Like in a Hallmark movie but better. Because you have life throwing many curve balls at Evie and Ronin. And they’ll have to weather the storm. Together.

I loved these characters!

“I wanted to roll around in her positivity like a child in a pile of crisp leaves.”

Ronin, Roe, is charming, heroic, selfless and a devil in bed. He also sure knows how to woo a girl and has the most romantic speeches I have ever read!

There is also the “best proposal scene” and the best “marriage vows” scene. I’ll keep these for my end of the year “Best of” challenge in December!

Also Jewel has some fantastic quotes and analogies as usual. Some that inspired me like “the birth and the sock”. It does sound like a crazy book title right?

Well the exact quote is:

“The midwife remained in chill mode with a smile on her face and her soothing voice repeatedly reminding me to “open up.” It’s not like I was trying to close my vagina. It didn’t have an actual door with hinges. It was like trying to put a toddler’s sock on an adult’s foot. Sure … it could possibly stretch that far, but probably not without tearing it. And the sock would never be the same.”

Yet this story is also about secrets.

Lila and Graham together are …complicated. We didn’t scratch the surface in this book and we are left with many questions.

Evie feels there is something going on and she will be fiercely protective of Lila! Because it’s a story of unbreakable friendship.

Ronin also harbors a secret. Something he hasn’t told Evie… Something that I tried to guess for a long time!

“Mine. Could she be mine if I didn’t give her all of myself?”

And when life will strike, he”ll hide other things from Evie risking so many things!

““You’re so damn smart, and it was wrong of me to act like you wouldn’t know exactly what was happening. I was … I am so ashamed that I let it happen to me.” Ronin blew out a slow, shaky breath. “But it did. And I hate that you had to find out like you did. I hate that I was too weak to ask for help. I hate that in my attempt to show so much strength, I bared my biggest weakness.”

That’s one of the parts where you realize that there are things out of your control. That you might lose people you love.

But also, that no matter what, you have to survive because others count on you. And they have to be enough for you to carry on.

“I felt dead inside. So tired of trying to control … everything.”

Jewel also knows how to do tragic and write dramatic scenes. Cue the female character, running wildly through an enormous estate, desperate to hide her sadness and crumbling under the weight of …life and its ordeals.

So this is a romance and a mystery. A contemporary fiction with a hint of paranormal. A story of friendship and of life getting messy. Written with Jewel’s usual finesse it will make you swoon, laugh, cry and eat all your nails (don’t plan on a mani pedi before reading but rather after you’re finished as a rescue mission).

Should you read it? Of course!