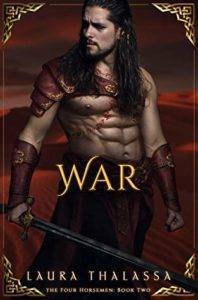 They came to earth—Pestilence, War, Famine, Death—four horsemen riding their screaming steeds, racing to the corners of the world. Four horsemen with the power to destroy all of humanity. They came to earth, and they came to end us all. The day Jerusalem falls, Miriam Elmahdy knows her life is over. Houses are burning, the streets run red with blood, and a traitorous army is massacring every last resident. There is no surviving this, especially not once Miriam catches the eye of War himself. But when the massive and terrifying horseman corners Miriam, he calls her his wife, and instead of killing her, he takes her back to his camp.

“Blood sprays, and part of the man’s body goes one way, the rest, another. It takes everything in me not to sick myself at the sight. Around me, a cheer rises up from the crowd. The world has gone mad. “

What you have here is:

First of all I have waited a looong time for this book but it was so worth it!
I adored Pestilence and could not wait for his brother War to have his story.

If the theme is the same as in following one of the four horsemen exerting God’s judgement on earth War and Pestilence are two beings and stories totally different!

Now if you pitched both against each other it would be hard to choose!

If pestilence was angelic in his appearance with long blond hair and blue eyes War made me think of Khal Drogo with long dark hair, savage dark eyes rimmed with khol and a huge body heavily muscled! And don’t forget his blood red steed!

Pestilence in the beginning of the story was really puzzled by some human habits. He had a kind of innocence and naivety to himself.
But War is the only horseman who has lived into the human’s hearts. He knew men’s hearts intimately and judged them.

For as much as Pestilence was a loner, traveling alone to bring illness on men War traveled with an entourage. Phobos warriors as his close guard and men, women, children who had lost everyone to war yet swore their allegiance and helped him annihilate the human race.

For all their differences both were inhuman beings and …lonely.

There is a longing in War that thawed my heart and made me wish for Miriam to surrender and give him her warmth and love.

I loved Miriam our female main character. She was courageous, selfless but also lonely.

When she meets War she has lost all her loved ones and has had to learn to live alone in Jerusalem since she was a teenager.

In that apocalyptic era forget all modern amenities like electricity, cars, running water etc.
Can you imagine as a teenager living all by yourself in a country who has always known violence?

It would take tremendous moral strength yet that’s what Miriam did. She was resourceful and used her mother’s historical manuals to design weapons. Arrows made of wood and heads made of old glass or plastic.
She survived for so long thanks to some simple rules she followed religiously.

War will invade her city leaving no human alive except if they swore allegiance. The battle scene was brutal and allegiance was sworn bathing in the blood spilled on the earth by dozens of prisoners. Don’t agree then get beheaded. Brutal, bloody and savage!

Miriam will refuse to surrender and choses death but War will spare her as she is destined for him. She will be his wife.

Needless to say that Miriam absolutely denies being the wife of such brutal and blood thirsty man. Because where there is war there can’t be love.

That’s when it gets highly interesting and entertaining as Miriam will get creative in her goal to save as many humans as possible. I was really curious to see how she would sway war. The dude did not seem to be easily manipulated and he was dead set on succeeding contrary to his brother Pestilence!

I was gleeful when I saw both butting heads. Both stubborn. The human versus the formidable warlord.

She is working against War but he is so determined to care for her, to concede to her “tender heart” that Miriam had a hard time resisting this other side of War.

That’s where Laura Thalassa did a real “tour de force”. She wrote War in such way that it was impossible to mistake him for human. Impossible to forget his holy nature.

Yet all along respecting his otherness she softened War and had him love, doubt and suffer like human does. All because of Miriam. That lonely and stubborn soul so perfect for the warrior.

I have just two words for you: read it!

Have you read pestilence?